SLOVARM was established in 2000 as the successor to Slovenská armatúrka Myjava. It specialises in residential fittings and piping system components for compressed air, cold and hot water, steam and central heating systems. It merged with SLOVPLAST in January 2020 and expanded its production program to include a range of plastic sanitary products.

SLOVARM is a stable and reliable supplier of residential fittings, piping system components and plastic sanitary products for major European and transnational companies.

SLOVARM’s customers are globally established brands from various industrial sectors. Following the merger with SLOVPLAST, the company took over its manufacturing program and expanded its own product range to include plastic products for demanding applications in the mechanical and electrical engineering industries, the consumer goods industry and the automotive industry and is a certified test centre for moulds used in the production of plastic products.

Technological capabilities and experienced employees enable us to flexibly respond to customers’ needs and to optimise production accordingly.

SLOVARM is a holder of all relevant certificates in the field of business process management and declared product properties. Extraordinary emphasis is placed on ensuring products do not pose a health risk or an environmental burden.

Following the dissolution of Slovenská armatúrka Myjava in 1999, successor companies SLOVARM and SLOVPAST rose from its ashes and restored its manufacturing activities. These companies were merged in 2020 and the manufacturing of fittings and sanitary equipment continues under the SLOVARM name.

After the successful modernisation of both companies, the Energy Group merged them together, thereby restoring a majority of the manufacturing activities of Slovenská armatúrka Myjava.

Origins of fitting manufacturing in Myjava

Arrival of the Tauš company in Myjava, laying the groundwork for brass manufacturing activities

Following the change in ownership, the factory is engaged in manufacturing activities under a new name, Slovenská armatúrka Myjava.

Following its transformation from a centrally-managed economy to a market economy, the company voluntarily entered into insolvency and terminated its activities.

A new owner is purchasing a portion of our plastic-based fittings manufacturing operations. The successor company SAM Holding, a.s. is continuing the manufacturing of plastic sanitary equipment

The Energy Group kicks off the consolidation of brass manufacturing at Slovenská armatúrka Myjava and establishes its successor, SLOVARM, a.s.

Expansion and modernisation of production

The Energy Group is investing in SLOVARM to expand and modernise manufacturing and is launching new continuous brass rod casting technology.

SLOVARM has seen a 100% increase in custom production in the ten years since its establishment.

SLOVARM Myjava produces and supplies plastic products for heavy-duty applications in the mechanical and electrical engineering industries and the consumer goods industry. It is also a certified testing laboratory of moulds used in the production of plastic products.

The Energy Group is the new 100% owner of SAM HOLDING, a.s. and is changing the company’s name to SLOVPLAST Myjava, a.s.

Energy Group will continue to invest into SLOVPLAST Myjava and specifically into new technologies, renovation of manufacturing buildings and the optimisation of production processes in the future.

Radovan Pobočík
Chairman of the Board

Darek Stöhr
Member of the Board

Ing. Štefan Vystavel
Member of the Board

SLOVARM is a stable and reliable supplier of residential fittings, piping system components and plastic sanitary products for major European and transnational companies.

Slovarm is continuing its financial support for the civic association SLOVENSKO BEZ DROG. This initiative focuses on educating high school students and primary school pupils about the danger of drugs. 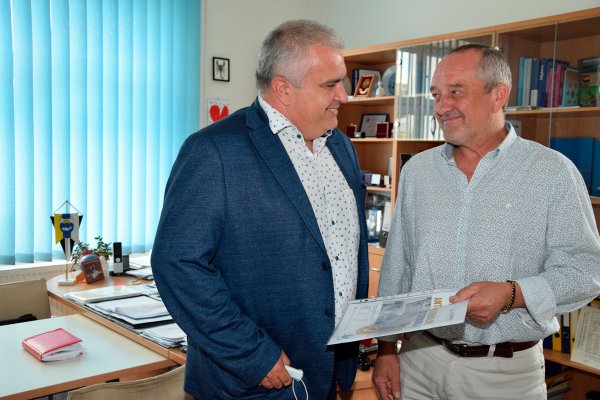 In the time of the coronavirus crisis, SLOVARM supports the city of Myjava

Despite our own fears, uncertainty and security precautions, SLOVARM has not forgotten about the citizens of Myjava, where most of our employees come from. The company has donated the latest generation of its own antibacterial products to the city, supporting the improved sanitary standards of several city facilities.